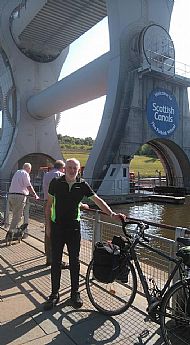 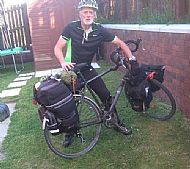 John Devlin has completed his 1000 mile unsupported cycle ride from Dover up to his home in Glasgow. Whilst the rest of us were basking in glorious sunshine, John was battling it out against severe north easterlies nearly all the way. In the first week he lost a stone in weight due to the consistent pressure he had to keep on the pedals to keep going. Despite breaking a pannier, requiring emergency treatment on a tooth and the weather John showed true grit to complete this mammoth journey. John found out about HATWUK during a chance meeting whilst climbing a munro in the Arrochar Alps in Scotland where he met Gill, who was also climbing at the time. They shared the summit and the walk down and discussed everything as you do on a hill on a sunny day. Following this John contacted Gill and said he would like to raise some money for the kids and so this is the tremendous result. Thank you John for putting yourself through so much pain and effort to help 106 children at the Baan Than Namchai Orphanage.